OK,  I slammed my hubby a little too hard on that last post, so in all fairness, I think I should set the record straight on  some of  the GOOD STUFF he’s done!

I’ll start right after we met, just about 13 years ago, because that’s when I  got my first  glimpse of his kind heart.

Two of my daughters were still in high school and living at home.  We had the bad luck to come down with the flu all at the same time. Hubby’s car was broken down and he lived on the west side of town, yet he took two buses to get to our house and take care of us for two days. Major point score!

On our first date, we went to lunch, then we went to some thrift stores–not terribly romantic, but something we both like to do. At one store, I saw a pair of vintage pearl and diamond earrings I just fell in love with. He bought them for me and they became favorites; still are.

Too many incidents to recall them all, but these  stand-out:

Shortly after 9/11, I began to have violent nightmares and dreaded going to bed. He was living here at the time and did his best to keep my spirits up. One night, after a particularly stressful day, I was weepy and restless, dreading sleep again. I got  up to go to the bathroom, and when I got back into bed, he hugged me and I thought I felt something weird.  I turned on the light and he was wearing my sexy, one piece black bathing suit! I laughed so hard, all the gloom went out the window!  He’ll probably cringe at the re-telling of this, but it’s a favorite “good” memory.

More recently:  Last year we had a birthday dinner for my BFF, Mary. We invited some mutual friends to join us. Shortly before dinner, we found out our other friend’s mother was going to join us and it was her birthday too. Without asking me, he took the sheet cake I had bought at Fry’s back to their bakery department and had the decorator add the other woman’s name to the cake. I was amazed that he would even THINK to do something like that.

Just a few months ago: Hubby was picking up some parts for work at a local auto parts store. There was a young couple in there with a little boy about the same age as our grandkids. The little one had found a package of Hot Wheels cars he really wanted. Hubby heard the mom tell him they couldn’t afford them until Dad got paid on Friday. Hubby took the Hot Wheels to the cashier and after paying for them, handed them to the mom.  She protested that he didn’t have to do that. He replied that  “I have a grandson about his age, it’s ok.”

Random acts of kindness make the world a better place.  On THIS,  he does his share! 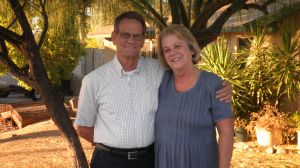 3 thoughts on “And now, for something totally different!”